Showing posts from January, 2015
Show All
- January 27, 2015
Saraswati Puja Saraswati Puja was celebrated in VKV, Dibrugarh on 24thJanuary, 2015 in the school campus to pay allegiance to the Goddess of knowledge, learning, arts and culture. Devotees including students, well-wishers and parents in great numbers flocked to the school in their best attire. The Goddess of knowledge, Saraswati was revered among the students and learned following the rituals strictly to worship her. Puspanjali was also offered to the serene Goddess seated on a swan under the guidance of a Pujari. The devotees were enthralled by the continuous chanting of the hymns in the traditional way the Puja was conducted to augur enriching powers and faculties of the students in the field of creative arts, learning and science. Students, Teachers, Parents and Well Wishers about 2150 (approx) were present in the festivity to pay their respect to the patron of music, culture and learning. Khichdi delicacies  was served as Prasad among thedevotees.
Post a Comment
Read more
- January 27, 2015 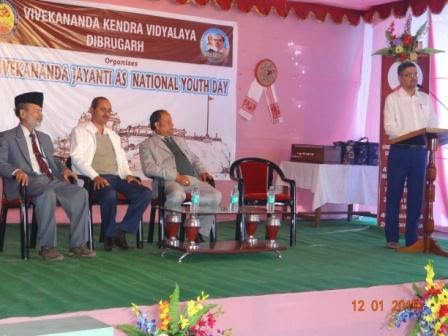