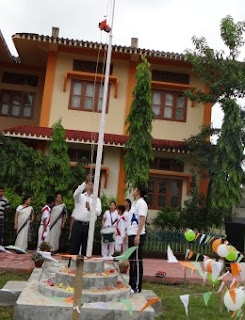 
On the Independence Day, the students and parents gathered in the field around 7:30am. The prgramme started with Mangalacharan at 8am. The NCC cadets ascorted Vice Principal, Sri B.M.Naidu to the flag hoisting spot. The flag was hoisted by Vice Principal of the Vidyalaya, followed by National Anthem all together. Our Vice principal gave a speech which centred around the dedication of various freedom fighters in contribution to India’s Freedom. He also said how India has progressed in every sector. In the International level India today stands in a respectful position. He also said how students being in their own position can contribute to the country’s development.
This was followed by a small cultural programme which included two patriotic song sung by students of class V and VIII and an action song by the students of Class IV was really mesmerizing. The programme ended with Shanti Mantra.