A brief cultural programme was organized on the occasion of Srimanta Sankardev tithi & Universal Brotherhood day on 11th Sept, 2018 at VKV Dibrugarh. Smt. Rita Didi, a teacher of the Vidyalaya spoke on the significance of the day. Highlighting the role of Srimanta Sankardev, she said that Sri Sri Sankardev united people of different caste, creed and religion under the name of Eknam Ekhoron’. A brief naam was also organized. 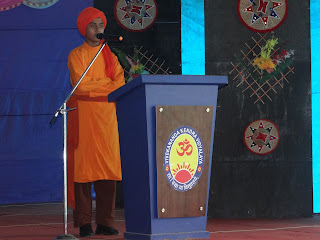 The Chicago speech was delivered by Kr. Ekalavya Saha of Class-VIII. Principal Sir spoke on the significance on Universal Brotherhood day. Highlighting his role as social enformer. The Principal said that Srimanta Sankardev wrote many religions book like “Kirtan Gokhona” and the creator of the famous art of drama called Bhaona.


An induction camp was organised for new teachers in VKV Dibrugarh for three days starting from 20th March 2014   to 23rd March 2014  . 64 Teachers from different VKV Vidyalayas attended the Camp. The Camp Members followed regular routine from 6am to 9.30 pm  with several activites like Pratahsmaran,Yogabhysa, various Satras by experts Kridayoga,Bhajan Sandhya etc. They were given a brief idea on the life and messages of Swami Vivekananda , his dream of Man Making and Nation Building , the story behind building of the Rock Memorial and classes on teaching techniques and methodologies.
Read more